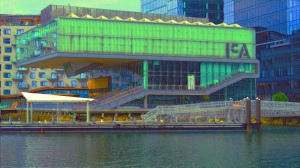 April 6, in the year of our Lord 2020, Day 28 (which is FOUR WEEKS) nailed to this cross (yep, an Easter reference): Must admit, we got us a beautiful day here in Onset.

Blessing of the Fleet: One of the fun things about living above a marina is watching the crew scurrying around, moving boats like chess pieces here and there, getting ready for the boating season. Apparently the stay at home order has not made it’s way to the boatyard, so the activity has been non-stop (can boating actually be considered an essential service?). Of particular interest is Grimmy, a round little guy with a perpetual tan and Friar Tuck hairline, who drives the boat haulers, slipping the boats down the ramp into the bay. Last summer he let Bill put his Boston Whaler in for the day, so Grimmy is a good guy in our book. There are already about 10 boats in slips, with more going in every day. I suppose finding six feet of separation in the ocean is not very hard.

Mega-roll hunt update: If you recall, a couple weeks (years?) ago, I failed miserably at my effort to get up early and snag some toilet paper during the 6AM Stop and Shop Seniors Only Shopping and Dance Hour. While I was able to get two packages of four rolls each, it was far less that my hoped for 24 or 36 pack. And every other time I’ve gone hunting, I’ve come back empty handed. So why am I not whining, crying and blaming the world for their primitive hoarding practices? The slow, methodical (dare I say, stealthy) practice of picking up any and every box of tissues wherever I see them. It’s not a true “stash” but we seem to be safe for now.

Snake Oil Update: After many years (minutes?) of research Dr. Orange Baby, MD, has published (via news conference) the results of his studies that the entire nation has “nothing to lose” by taking hydroxychloroquine to cure COVID19. His medical expertise was on full view when he pushed his way past a real doctor (Anthony Fauci) to prevent him from giving his opinion on the subject. Apparently Dr. OB’s research neglected to include side effects, such as hair loss, vomiting, dizziness, schizophrenia, exploding pustules and certain death. OB has determined via consultation with his medical (polling) team, that, a) if it works he’ll get all the credit, b) if it doesn’t work he’ll deny he ever said it, and c) if a bunch of other people die or suffer horrendous side effects it won’t matter because, what-the-hell, people are already dying and suffering, so who’ll notice? Oh, and Kelsey, who has lupus and is dependent on that very same drug, has been unable to get any from the pharmacy for weeks. Luckily, being a nurse, she was able to get some from her hospital. So, you might ask, what if she wasn’t a nurse (like 99% of the people with lupus)? As Will Smith said when he first tried to fly an alien spaceship in Independence Day and ran into a wall, “Oops. “

Speaking of Kelsey: On March 25, she was tested for COVID19. As of this writing, she still has not gotten her results. Pandemic? Emergency? Crisis? Um….

Speaking of Testing: If you recall, many weeks (years?) ago, Dr. Orange Baby said, with his typical air of complete and utter confidence, that anyone who wants a test can get a test. Thankfully he mustered the entire force of the federal government to produce all the tests we’ll ever need. So successful has he been that when asked about problems with testing last week he said that he “had not heard about testing in weeks,” so he assumed it wasn’t a problem. While that is a very sweet dream, it actually doesn’t have much to do with reality. In most parts of the country, people still can’t get tested unless they meet specific criteria. According to Elizabeth Rosenthal, a former ER physician and New York Times (fake news) journalist, “there are hundreds of thousands more people who should have been tested at this point, if more tests were available.” Now, I know that I’m not OB’s biggest fan, and he’s not responsible for everything going wrong in this s@#$show of a pandemic, but three months into this thing, you might expect a little more knowledge about how much testing is being done, what the problems are and what to do to figure it out. In a parallel universe, where our POTUS is virtually anyone but OB, our President might have prioritized testing so we could, a) use the data to understand the scale of the outbreak, b) know who has already had it so they could perform helpful services to others, c) know if a sniffle is a cold, flu or COVID, d) allow family members within a household to know the status of their family members and act accordingly, e) get the economy on a path to normalcy by letting recovered people back to work. Now, you may say (as OB has said) that we’ve done more testing than anybody else. Well, you’d have a point, because it’s true. Nearly 2 million already. But given that we found out about this at the same time as almost everybody else, you might expect, given the incredible impact on the economy, we would also be at the top of the charts in testing per capita (i.e. in the chart below, tests per 1M population). Because that’s the best indicator of our testing success. Or maybe second or third. Or tenth. Or fifteenth. Maybe twentieth. Certainly 25th. Couldn’t be lower than 30th. No way worse that. 39th, right? Bingo!!! 39th in the world in testing per capita. Woo f-ing hoo!!!! So, in an effort to recognize the importance of giving accolades and appreciation to our fearless Baby-leader, I want to go on record as saying, Thank you, thank you, thank you, dear OB for your deft and courageous leadership in moving us all the way to 39th in the world in COVID per capita testing at the same time we are absolutely crushing the rest of the world in total infections. With your guidance we are certain to be ready to get our economy up and running at full capacity sometime during my almost born grandchild’s lifetime.